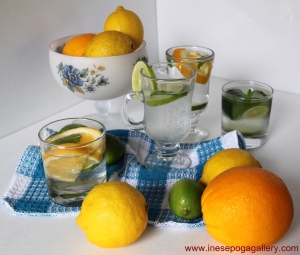 While standing in the grocery store line, it’s impossible not to pay attention to what people are putting in their shopping carts. There is pretty large crowd which walks around the store with flyers in their hand looking for deals and discounts. Well, it’s not that the best products or the freshest ones get into this flyer, but we can sometimes get promotional products at very inexpensive prices. However, the most deals are offered for unhealthy and processed food and drinks.

I would say there’s a reason why soft drinks like Coke, Pepsi and Sprite family drinks are banned from schools and their neighbourhoods in quite a few European countries. My native country Latvia has always been strict with such foods and drinks, the positive side is that we didn’t even see them or know they existed until borders were opened in 1991, and the Latvian market was flushed with North American chemical foods and fast food places appeared. We had practically no obesity and related issues until the era of imported stuff begun. Believe or not unlike in Canada, real dairy products are still available in Latvia. It’s always up to consumers because manufacturers will try to meet the demand. When consumers show their dissatisfaction with chemically enhanced food, manufacturers and food producers have no other way, but to offer food and drinks which are in line with healthy eating guidelines and which are compliant with restrictions in use of chemical ingredients.

I’ve read in some surveys how people who told Coke was a total poison and Pepsi was a pure junk were attacked. That makes one wonder: are there really too few obesity, type 2 diabetes, digestive and heart and blood vessel associated diseases and cases yet? Isn’t there proof enough that not real food, proteins, carbohydrates and fats make a person sick, but their chemical substitutes and surrogate ingredients? Nobody would need to ever diet or fight the unwanted pounds if all of a sudden fast food, processed food and chemically produced food and drinks disappeared. However, that is NOT going to happen because profits always come first. There is a wide range in standards for chemicals and their maximum contents in food products. Therefore, the choice is ours: we all can exclude chemicals, fast food and processed foods from our menu. To some extent at least, because vegetables, fruit, berries, herbs and organic products are still a subject to standards, and these standards allow for plenty of variation. Organic DOES NOT mean the product is completely free of chemicals, pesticides and fertilizers. Organic means the amount of harmful chemicals meets the stated limits.

It has been abnormally hot in Canada, Ontario for the last 2 weeks. We are expecting one more heat wave. Everybody will need to quench their thirst, and everybody will have a choice: use pure water, mineral water or fruit flavored water for hydration, or just grab some soft drink, milk shake and juice. When we talk about hydration, there is nothing better than PURE water. There simply isn’t. For quite a few reasons: for its chemical formula, for the fast absorption rate, for its friendly attitude towards our cell structure and for its lack of chemicals (however, some tap water can contain a lot chlorine, even antibiotics, even metformin which is blood sugar lowering drug, even residues of very harmful chemical elements: everything which does not degrade naturally and fast within the source of drinking water). We are very fine when we use MODERATE amounts of water because overdoing anything has bad consequences (hyponatremia or deficit of sodium in the blood stream). Everything else will have some additional something: juice is too high in sugar, soft drinks are high in sugar and mainly consist of chemicals, milk shakes and ice-cream based drinks have way too many calories. The only thing we actually need is to hydrate ourselves and maintain a good functionality, isn’t it? We don’t have to intake as many calories as with meal for this purpose.

How about kids? Kids will use whatever their parents are offering them from early childhood. When the family does not use soft drinks, kid will never have cravings for them. When the family is not addicted to sugars and fast foods, kid will never know such disorders as type 2 diabetes even exist. Some parents are very worried that child does not eat enough. Well, normal kid will not starve himself to the point when some disorders occur. Kid could be reluctant to drink enough water, though. I also told this in my previous post: making fruit flavored water with colorful slices of citrus fruits is a good idea because this type of drink does not raise the content of sugars noticeably, but hydrates well. Nobody has appetite when the blood glucose level is too high. We humans are having lots of signals in place to know when we are hungry (and being hungry is really good, but not starving), therefore, if kid has had some sugar-rich food or drink before, they will not be interested in eating normal meal. Adding colored ice to such drinks is also a nice thing: we can freeze small mint leaves in ice cubs, we can freeze tea and juice to add to water, it looks very attractive.

My photos of fruit flavored water and ice

For people who want to stay away from alcohol: using sparkling water with lime and mint allows to get rid of cravings for alcohol 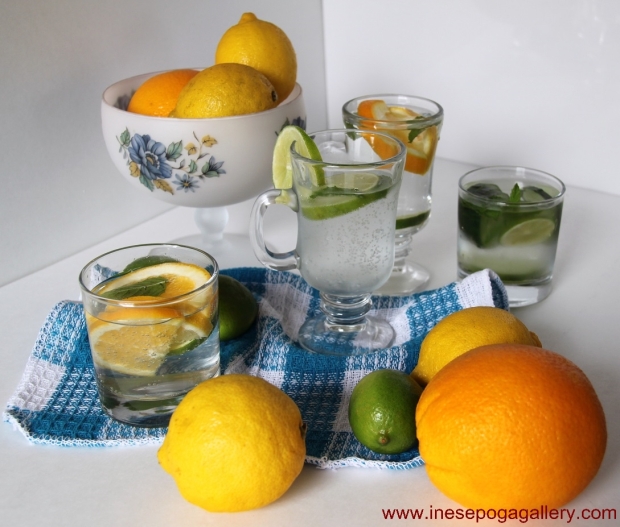 I’m always embarrassed how when we have to stop on the roadside while travelling for some snack these places always will push one to have a Coke or Pepsi with food, but when I ask whether they have sparkling water or mineral water, they quite often don’t. Well, I usually get by asking for water with lime.

Stay hydrated and use healthy water to quench your thirst!